B and I wanted to get away for at least a few days over the holidays.  after much debating over thailand, hawaii or mexico, we ended up just jumping on a livingsocial deal for a hotel in monterey.  Our holiday get-a-way got cheaper with every debate.

We stayed at the Casa Munras Hotel and Spa in Monterey, CA.  It looked super cute online..but in person it was meh.  Nicer than a motel, but not as cool I as I was hoping it would be.  And the in room fireplace that drew me into buying the deal on living social? It was gas, which flicked on with a switch.  Not exactly romantical.

Oh well.  Next year we’ll keep the holiday trip debate to a minimum and maybe actually end up going to Thailand like I originally wanted.  The goal is to not get scared off by sticker shock.

There is no way a bio teacher can go to Monterey and not go to the famous Monterey Bay Aquarium.  So B and I shelled out for the tickets ($60!!!!) but only had 2 hours left in the day to see everything.  So we formed a plan of attack and stuck to it.  It’s a really good thing both B and I are tall.  and fast walkers.  we can maneuver the shit out of any crowd.  here are some highlights from the trip: 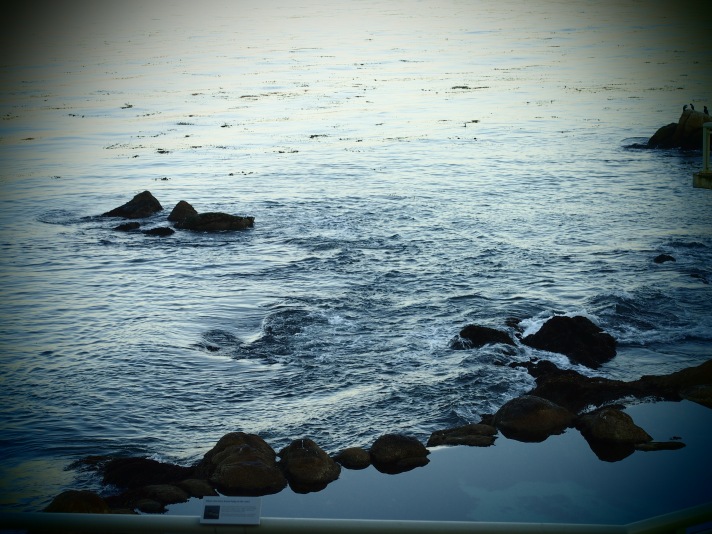 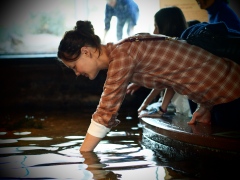 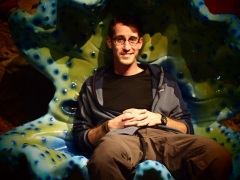 trying my best to feel up some sting rays.  really resisting the urge to make a stupid steve irwin joke here.  B would not appreciate bad aussie jokes  =)  but he would appreciate silly pictures of him sitting in a rainbow clam shell.

Sea Otters!!    The cutest marine mammal by far.  They currently have three otters, all behind thick plexiglass.  All the photos sucked.

Seahorses.  one of the very few groups of organisms where the males put forth the resources/time/energy to nurture offspring.  Males take the eggs from the female and get “pregnant”.  My kind of animal.

and then there are the facier ones.  the dandy, the sea dragon.  oh you fancy huh?

Sea dragons are very limited in their distribution, their habitat range.  They are only found in the south western waters of Australia.  Coincidentally, that is also where B’s father lives and dives.  For him, sea dragons are an everyday thing.  fancy huh? 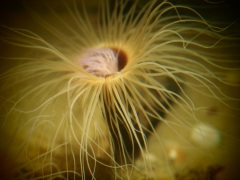 cuttlefish.  cephalopods could rule the earth one day.  really.   no joke.  the jellies on the other hand…they’ll just plain kill you!

Monterey in the end, was just ok.  we had a ridiculously expensive massages with chi chi aromatherapy oils and fluffy robes.  We enjoyed the breathtaking views of the california coast and big sur.  We lazied around together.  That was the ultimate goal after all.

Neighborhood ride on South Table Mountain. I haven’t done nearly enough biking this season so I’m woefully out of shape. 🚵‍♀️😵💨💨
Two 🐟in the net at Cheeseman Canyon and a 🐍!
It’s been a while since I’ve spent a day on the river. It was an exciting day of dry fly bites and sniffs, but I only landed one in the net. He was a chonk and so I celebrated with a beer on the bank after he flopped out of my hand.
Went on a hike today. Snacks at the end were clutch.