in between the storms and the races 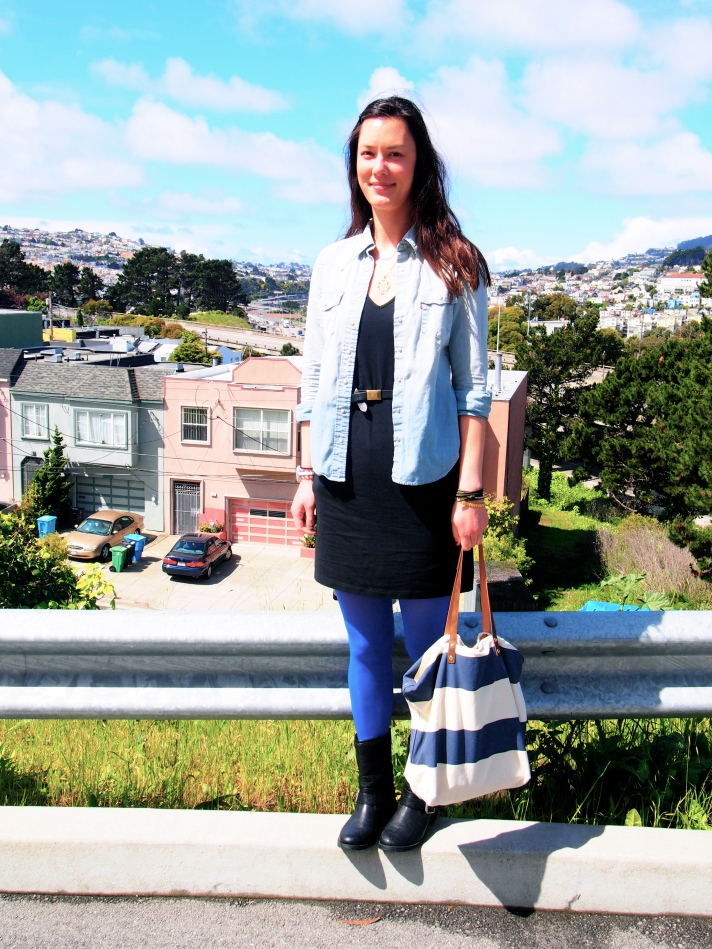 It stormed like crazy last night.  We don’t get real lightning and thunder very often here in SF, so when it does happen everyone talks about it.  City dwelling high schoolers reverted to grade school kids sharing their fears.  It’s funny here in SF: earthquake? “Meh, no biggie.”  Thunder? “OMG that was sooo scary!”  The storms cleared today, but it looks like another one might be rolling in this evening.  I took advantage of the lunchtime sunshine.  Too much blue?

My mom gave me this necklace about a year ago when she was going through a rough time.  She picked this necklace out when she was 12 years old in Saigon, Vietnam.  Her favorite uncle had given her money for something like this just before he died.  The character (in cantonese, which we speak at home) is “fook”, which means good luck or good fortune.  These necklaces are not meant to be taken on and off frequently, so I just leave it on all the time.  Wearing it all the time also means I tend to get sideways glances/stares from chinese people on the street.

Asian people tend to think I’m Caucasian and and vice versa.  Kids are usually obsessed with questions like “what are you Ms. Schenck” at the beginning of the year.  Last semester, I made it a point to tell them flatly, “I’m San Franciscan American” and left it at that, redirecting each time.  Mostly, they would get visibly frustrated and try to guess.  Eventually, after much explanation and discussion, they stopped asking.  They laughed when I pointed out that other countries don’t obsessively classify their residents by skin color (hello, I’m Chinese Brazilian!  or hi, I’m African Australian!).  They agreed that knowing my ethnic background would in the end have no relevancy.  But they still just wanted to know.  So they went out and asked around and eventually figured it out.  I understand when they talk shit in Chinese, after all.

One thought on “in between the storms and the races”

Bambi heads over the rainbow bridge this afternoon, so I took her on one last hike to see the flowers.
B and Me
Met up with @beaulebens in Buena Vista for some light mountain biking. I took the easier route for the big drops.
Went solo camping and fishing for the first time ever. First night was great and rejuvenating, second night I got lonely. I caught a couple fish, but don’t have photographic evidence. 11 mile canyon remains one of the most frustrating (for me, other people were catching heaps more than me) but beautiful waters.